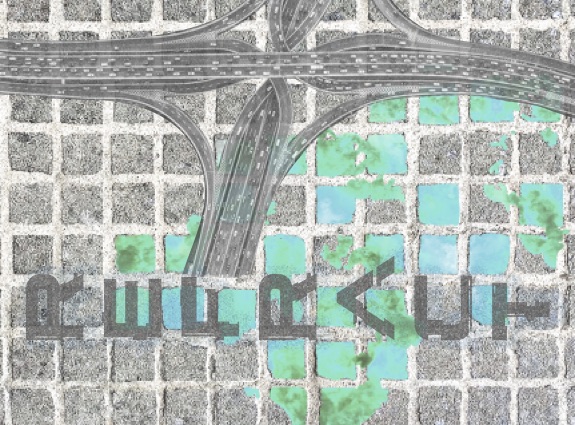 refract considered these artists’ perspectives and various approaches to how meanings are constructed within geometric forms, everyday objects and other common images through different methods of repetitions, patterns, juxtapositions, and distortions. Their work considers how the functions of objects and shapes may be reconsidered. In place of how we might take the everyday visuals around us at face value or for granted, these artists’ lenses lend the mundane with a broader range of possibilities and multiple potentialities for understanding and experience.

Video installations and printed digital works by Owen Barensfeld use images from both historical and the artist’s personal archives. Using a process rooted heavily in forms of disruption and distortion, his work is in constant flux and transition, mediating through various mediums, meaning, and dimensions- all of which are both real and ethereal. Barensfeld is currently based in Troy, NY, and since achieving his MFA from SUNY Albany, has been practicing actively throughout the Hudson Valley artist community.

In both three dimensional sculptural works and two dimensional mixed media pieces, Royal Brown seeks to find an essential “core” within objects that may connect the past, present, and future in a single moment. His sculptures, called Angelic Star Dragons, are constructed from discarded found objects and composed to represent the ancient and the future, but not the human. Brown connects these moments in a system of symbols that he considers a functional alphabet as well as “frequencies of consciousness” which can reflect and map the lifetimes and histories of his ancestors.

Recent work by Benjamin Jose endeavors to revise visual and conceptual language through the careful arrangement of recognizable objects in ways that negate their utilities and related activities. Jose resists categorization both as an artist and in his creative practice while his works also maintains a dialogue with cultural and societal expectations. Instead of illustrating his ideas visually, the intentional non-usefulness of his objects invite his viewers to generate their own meanings within both the artist’s and viewers’ conceptualizations of memory and our contemporary time.

Through collection and assembly, Naomi Lewis creates delicate and sensuous networks of often-overlooked stories. Layers and repeated patterns of elements work together to reveal resonance and order, thus giving her work an interconnectedness and presence on the wall. Lewis captures and holds small moments in time within these quiet processes, speaking to a notion of humility reflected in the ephemeral nature of her chosen materials. Rather than feeding into a “current climate of rewarded hubris,” Lewis’s work instead elevates the subtler narratives of community and serendipitous beauty found in unlikely places.

Trevor Wilson’s current body of work, some pieces of which are on view in this exhibition, focuses on “the grid” as a basis of formal investigation. Even in limiting his creative process to the simplest of geometric forms, the square, Wilson has discovered a means to explore infinite possibilities in just a simple shape. These grids are what the artist calls “psychic architectures,” which use symmetry as a method to convey single moments of time and tensions between “perfect” and “imperfect.” While the preface for the format is itself static in composition, Wilson plays on tonal gradation, overlapping patterns, and, more recently, color to lend his works a sense of “existential buzzing.”

refract was curated by Jennie Tang, ACG Curatorial Associate. The exhibition was made possible by ACG Premier Sponsors: David Phaff & Howard Hanna Real Estate Services; and Kevin Dubner, Partner & Wealth Manager at Steward Partners Global Advisory, LLC. Additional support was provided by Kevin & Cindi Dubner, and the New York State Council on the Arts with the support of the Office of the Governor and the New York State Legislature.